For past 25 years I have been growing unique and personal expression. I have been teaching, performing and dancing it during the same amount of time. What I’m doing at this point is a style that embraces various interconnected elements. Simple headtitels that represent these elements and give name to What, How and Why are: Skillfulness, Personal fulfillment and Treatment.

The fact of mentioning the interconnection is important key point since integration and seeking the connections are very subject of my research and not the unconscious byproduct of practicing specialized disciplines or styles.

This workshop is a suitable occasion for you to discover my artistry. The experience of it does not depend on your background but requires hunger and interest.

I will be dancing. You can be dancing too if a definition of what dancing means for you has a degree of clarity. Good wishes to all.

Martin Kilvády was born in 1974 in Banska Bystrica, Slovakia, where he graduated from secondary school. Subsequently, he enrolled in a program for teacher education in contemporary dance at the Comenius University in Bratislava, the School of Music and Dramatic Arts where he received his “Master of Arts”. Choreographers and teachers who most influenced his further development as a dancer are Jan Durovcik, Miroslava Kovarova and Libor Vaculik. From 1992 to 1996, he was a member of the Torzo Ballet Company in Bratislava and performed as a free lancer in several productions of the Slovak National Theatre from 1995 to 1996. In 1997 he joined the Magyar Fesztival Ballet in Budapest for one season.

During the summer of 1997 he became a member of Anna Teresa de Keersmaeker’s ROSAS dance company, in Brussels. He danced in WOULD, in the reprise of MIKROCOSMOS and ACHTERLAND, and contributed to the creation of JUST BEFORE, DRUMMING, I SAID, and IN REAL TIME. During these years with ROSAS, the teachings of David Zambrano and Chrysa Parkinson widened his dance horizons.

Between 2001 and 2004, he collaborated with the choreographer Roberto Olivan in the creation of NATURAL STRANGE DAYS and DE FARRA. In the season 2002-2003, he worked with circus company Rital Brocante. Since 2003, he has been a member of Thomas Hauert’s company ZOO, performing in FIVE, MODIFY, MORE LESS SAID SONGS, WALKING OSCAR, PUZZLED and ACCORDS.

Martin Kilvady is co-founder of Les SlovaKs Dance Collective. They created Opening Night in 2007, Journey Home in 2009, in 2010 Les SlovaKs – The Koncert and in 2012 Fragments.

Martin has been teaching for 25 years now and has MA in pedagogy of dance.

The workshop is supported by the Fond na podporu umenia. 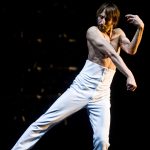 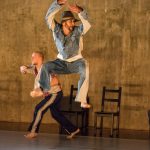 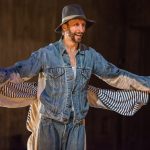