“We are slowed down sound and light waves, a walking bundle of frequencies tuned into the cosmos. We are souls dressed up in sacred biochemical garments and our bodies are the instruments through which our souls play their music.”

In Kvint et Sense, guided by the notion that all that is around us is a vibrating matter, we become the vessels to manifest all the vibrations that we are and that surround us. We encourage the diversity between us, creating a space, where hierarchy can dissolve. None of us is more important than the other, though our differences are fully embraced.

The music, together with the memory and possibilities inscribed in the space, together with you experiencing – all these vibrations enter our bodies and shape us, move us. We shift from one manifestation to another. Becoming the emotions and images that humanity caries since centuries. Becoming the individual stories and feelings that each person carries with them. Becoming the particles that are moving, expanding, collapsing in the space.

Kvint et Sense is a space in which we put ourselves to disposition, so that things that influence all of us, but that we at the same time can’t grasp and understand, can be felt, experienced, put to the foreground. To open your senses and feel the dance, which happens in-between you and the dancers, the dancers and the music, the performers themselves, the planets, the particles… 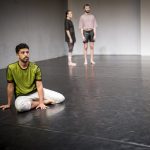 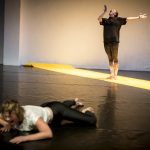 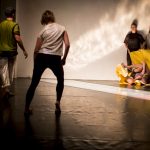