Combining dance, theatre and storytelling, Jungle is the surreal yet sensual story of four characters striving for survival and seeking refuge in a re-imagined post-colonial world. A world threatened by a new leader and a world in which your actions affect and infect everyone and everything surrounding you.

Jungle follows the journey of four figures, Billy; a traumatized American soldier, Carmen; a Venezuelan trans-woman, Teresa; a lost missionary and Vicky; a British feminist. The ambiguities of each figure could represent an entire nation or an individual being. Together and alone the four threaten, destruct, suffer and surrender to the notion of being in control or controlled.

With the experimentation of world music and contemporary electronic scores, the characters are driven to dance to their death and make sense of their unique place in this post-colonialism infested world. 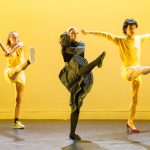 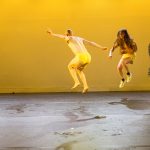 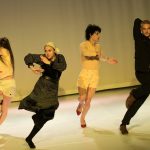 In 2011 in Bern, dancer and choreographer Sławek Bendrat, together with actor and director Dominik Krawiecki founded the company Pink Mama Theater. The intention of the creators of PMT was to produce performances that borderline drama theater and dance theater, thus combining theatrical means of expression. At the beginning of the theater research, PMT creators focused on humanity with all of its needs and emotions, but the changing political climate worldwide inspired them to show the contemporary human in their ever-differing surrounding reality. The Jungle spectacle won critical acclaim at the Edinburgh Festival Fringe 2018.