In a state of alert, the interactions of these presences are constantly inspected by a virtual, energetic eye, not making clear whether if its nature is authoritarian or passive, controlling or caring for. This fourth digital performer may still have the power to induce the public that performers or scenic areas are most relevant at the moment.

Jonas & Lander use the richness of cultural and natural biodiversity to create a labyrinthine dance. Light, sound and scenery are autonomous elements in themselves that affect the behaviour and reactions of performers, such as rain, night or spring are determinants elements of animal life. 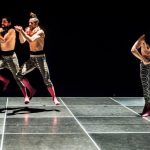 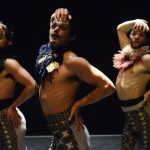 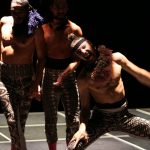 JONAS&LANDER have been contributing to each other’s imaginary since the beginning of their colaboration in 2011. They stand out with Cascas d’Ovo, the project that took them to several national and international venues. In 2014 and 2017 they were distinguished as “Aerowaves Priority Company”. In 2019, they premiered “Lento e Largo” coproduced by Rede 5 Sentidos, Theater Freiburg (Germany) and Teatro do Bairro Alto (Portugal), and “Coin Operated”, an invitation from BoCA – Biennial of Contemporary Arts.

Lander Patrick has suffered from chronic asthma since moving from Brazil to Portugal in 1989, the year he was born. He played volleyball to ward off the disease, but eventually graduated in dance. Lander has worked around the world with people he admires, such as Luís Guerra, Tomaz Simatovic, Marlene Monteiro Freitas, Alejandro Ahmed, Margarida Bettencourt, and Jonas Lopes, among others. After winning two awards in choreography – 1st prize at the Koreografskih Minijatura Festival (Serbia) for Noodles Never Break When Boiled and 2nd prize at the No Ballet International Choreography Competition (Germany) for Cascas d’OvO (“Eggshells”) – he found the motivation to work in the field of choreographic creation rather than at a call centre. Cascas d’OvO was selected for Aerowaves Priority Company 2014 and his work has been presented in Portugal, Italy, Sweden, USA, Germany, Brazil, France, England, Spain, Serbia, Poland, Switzerland, etc. He lives in Lisbon in a camper van with his love and believes that vegetarianism will contribute to the prolonged existence of the planet.

Jonas was named by his mother, who, in the throes of labour, promises to give her baby a biblical name. Later, he attends Chapitô school, where he spends three years with teachers like Sofia Neuparth, Amélia Bentes, and António Pires; he participates in an artistic residency in Italy, completes an internship on the stage of the São Luiz theatre, and contemplates the view of the Tagus river over lunch. Upon completion of his studies, he emigrates to London. There, he shares a flat with a person who grew up on a boat and another that was born in the Pyrenees, singing fado at events around the city and attending classes at the Pineapple Dance Studio. Nostalgic for Portuguese olive oil, he returns to Lisbon to record Rosa Negra´s album Fado Mutante, released in 2011 and winner of the 2012 Carlos Paredes award. He is admitted to Escola Superior de Dança, where he begins to create his own work in collaboration with Lander Patrick. He feels truly privileged to travel, learn and work with theatre, music, and dance artists like Margarida Bettencourt, Tiago Guedes, Sofia de Portugal, Jérôme Bel, Maria João e Mário Laginha, entre outros.