Our relation to nature is like a tree, and thus vertical. We stand at the highest level of unique observing. Our knowledge and researches are the results of theoretical and practical taming of the environment. This “divine” perspective of the human eye leads to the non-equal power relationship between us and nature. In our attempts to make surroundings sterile for people, we control whether the natural development of the natural actors corresponds with our plan. Horizontal approach, contrarily, expects from us to convert to the Juniperus horizontalis, so we can be connected to our environment with honour.

Project “A lullaby for plevel” is a result of art residence, which Darja Lukjanenko (UKR) had in the Studio Alta. Her initial intention was custody of community garden in a new base of Alta and also a connection of outside and inside using greenery. After that, her attention focused on loliums, which are classically considered as inconvenient. Exactly the circumstance, that the value of loliums always depends on a cultivator, shows that it is very contextual matter and that’s why it is also untrustworthy. Darja persists on the absence of exploitation and profit and this implies her “horizontal” approach towards every actor of the wild garden. The goal of the artist is to free loliums from the outsider position and apply maximum empathy and care to them. During the residence, she repotted weak lolium representatives, so their life cycle could be prolonged in the space, which belonged only to the “legitimate” plants previously. At the same time, it helped to green new space of Alta ecologically. In a bigger scale, Darja’s intention lies in finding ways to co-exist in solidarity with the world, which is changing no matter how humanity wants to see it.

This attitude also corresponds with the new mission of Alta, which focuses on the upcycling of the former building of Invalidovna after moving from Holešovice to Karlín. Archaeological excavations lifted deep ground, where Darja has found seeds as old as few decades, which keep the biological memory of this place. That historical gardening gifted seeds a new house either in flowerpots or in the community garden. This research of loliums will further exist as informational signs, where you can learn more about their sorts.

The reflection of this revaluation of the garden hierarchy leads Darja to the evening performance, which is based on the micro motions of the plants. Their representation in performers’ gestures teaches us to perceive our environment more carefully and inclusively, feel the solidarity with something mostly hidden from our eye. Darja creates a kind of sacral space for loliums, where they are situated between people, who treat them non-violently. The part of the performance is also live-lullaby for loliums, which will be played by the sister of the artist, musician Sasha Lukjanenko (UKR). 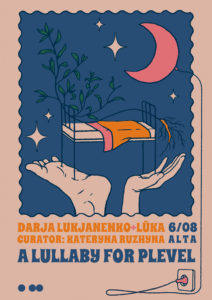