We are Csaba Molnár and Márcio Kerber Canabarro, and in the middle of February 2015, we decided to create, and work, together. Combining our interests in performance art and visual culture, we designed, sewed, crafted, researched, wrote, choreographed, performed and financed – ‘Tropical Escape’: A self-organized-creative-burst-challenge; a study of filthy dreams, connecting exoticism and the labor involved in pleasure and fantasy, with personal and historical references.

The initial stimulus for the project was the simple desire to explore materials together. We didn’t bother ourselves with funding applications – as the aim was just to spend time together, (we still discuss this issue, and sometimes it feels like a bold and rebellious decision, an attempt at resistance: to free ourselves from a pre-established contract of ideas to see what would come from nothing; sometimes sounds like suicide) and spent whatever spare time we had in the studio together.

As a result of this time and with the help of enthusiastic friends we created a 60 min piece and generated a diverse and dizzying series of array of avenues and ideas to explore and research.

Escapism as alternative resistance; escape not to surrender, escape as refusal of and as a way to survive the dominant normative order. The piece is a study of filthy dreams, connecting exoticism and the labour involved in pleasure and fantasy, with personal and historical references. “Tropical Escape” is the first collaborative project between Csaba Molnár and Márcio Kerber Canabarro. In 2016 the piece was awarded The Laban Prize of Choreography in Hungary. 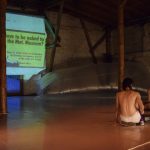 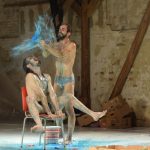 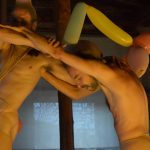