This new dance piece by Munich choreographer Anna Konjetzky stages fragile and inefficient bodies and thematizes our social interaction with them. The piece is in English.

As if in a game, five dancers compete against each other. They test their limits, work against muscle cramps, struggle with losing their balance, get out of step, fall, give up and start again. Inspired by YouTube videos depicting stumbling drunks and weakened marathon runners, the ensemble takes the subject of falling out of context, while analyzing and commenting on its own physical progress.

The company exhibits moments where people lose control, that show how delicate and vulnerable they are and how precarious safety is. The dancers devise techniques that accentuate the body’s instability while also questioning the reactions of those who are watching. Can failure be sensual, fragility be strength and imperfection an act of liberation? 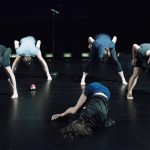 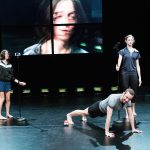 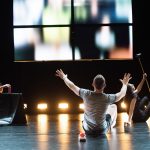 A production by Anna Konjetzky in co-production with the Münchner Kammerspiele and the Argekultur Salzburg. With the support of the cultural Department of the city of Munich. With backing from the BLZT (Bavarian National Association for Contemporary Dance) from funds of the Bavarian Stat Ministry for Education and Cultural Affaoires, Science and the Arts, and the Performing Arts Foundation e.V. , the Muffathalle Munich, and by Tanztenden Munich e.v.

The multiple award-winning Munich-based choreographer and artist Anna Konjetzky has created dance pieces and installations since 2005, making a name for herself as an “architect of space.”

An important aspect of her work – especially when working abroad – is the (re)creation of her pieces together with local dancers and the development of workshop-formats that meet the needs of local scenes. Complimentary Anna Konjetzky teached at universities and academies of fine art, like Académie des Beaux Arts Brussels, AHK Amsterdam and Hochschule für Musik und Tanz Cologne.

Anna Konjetzky is the recipient of numerous accolades and scholarships, including a dance scholarship of the Berlin Senate (2006), a scholarship of the city of Munich (2011), a Berlin opera competition prize (2009), a Leipzig’s Euro Scene Festival award (2009) and a Förderpreis Tanz award of the city of Munich (2014). Her dance installation, Abdrücke, was invited to the Tanzplattform Deutschland 2012. Currently she has a three-year grant from the City of Munich and from the Fonds Darstellende Künste. Her project NOMADIC ACADEMY received a support from Tanzpakt. Stadt-Land-Bund.