An intensive two-day workshop with experienced Belgian artists exploring the topic of dance theatre – reality and imagination, improvisation and dramaturgy – will take place during the launch of the project “Histoire de l’imposture” at the festival DANCE PRAGUE 2015. Suitable for professional dancers and performers.

You can book your attendance and pay for it online here.

You can also book your attendance via mail: karolina@altart.cz. 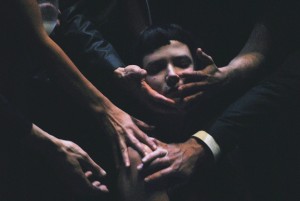 Since the beginning of their collaboration in 1985, Nicole Mossoux and Patrick Bonté have been creating specific works that cross the borders between dance and theatre. During their work for certain themes which deal with finding expression in motion, they combined these two artistic genres into one language. Within their works, they leave plenty of room for the audience to come up with own interpretation of the emotions that the performance provokes. Works by Nicole Mossoux and Patrick Bonté have already been performed in around forty countries.

Patrick Bonté studied philosophy, humanities and acting. He worked as a director and dramaturge. His desire to explore topics related to the mysteries of presence through theatre led him to research the formation of a language without textual narrative aspects, realism and psychology. Patrick Bonté is currently the artistic director of Les Brigittines (Centre for Contemporary physical art in Brussels).

After studying classical dance and graduating from Mudra, the Maurice Béjart´s school, Nicole Mossoux reconsidered everything she had learned, thanks to her exposure to the visual arts, working with non-professional dancers and her exploration of techniques such as Eutony and Tai-chi. She and Patrick Bonté founded a dance-theater ensemble, Mossoux-Boné. Since 1999, she has led workshops for professional dancers with a focus on the relationship between movement and presence, objects and costumes as well as workshops for children with autism and other psychiatric disorders.