“’Before you embark on a journey of revenge, dig two graves.” Confucius

A psychedelic Western from the Czech-German border region. Two women and two men, joined by crime and the desire for revenge. With this story of vengeance, Handa Gote explores the thin layer that separates the civilizational husk from the animal core. All it takes is a minor tremor to lay bare the animal essence. Revenge. Love.

The rules of revenge are a dark reminder of a time when only one law counted – the law that man wrote himself. But this law remains attractive even in a civilization that takes pride in its level of organization, its norms, and its legal system. Revenge is universally comprehensible and functions across cultures. People of all social classes are capable and willing to take vengeance or at least to enjoy a story of revenge.

Handa Gote consciously works with a simple subject and simple story structure, like the kind we find in most movies or works of literature on the subject of vengeance. The actors’ performances are based on collective research and make use of various elements of Noh theater, silent-era acting, and minimalist dance. Die Rache is a meditation on the phenomenon of revenge leading to perdition. We do not know the backgrounds of the story’s characters or what preceded the events of the performance, but we see where they are inexorably headed.

Handa Gote Research & Development is devoted to experimenting with dramaturgy, working with non-theatrical elements, and developing its own concept of post-dramatic and post-spectacular theatre. For many years the group has taken inspiration from science and technology, and its members continuously explore theatrical language and engage in laboratory work in the fields of sound and lighting design, all the while questioning these disciplines’ established practices.

Produced by: Jedefrau.org
In cooperation with: Motus, producers of the Alfred ve dvoře theatre, Studio ALTA
Premiere: 30. 3. 2017, Studio ALTA, Prague
With support from: The City of Prague, the Czech Ministry of Culture 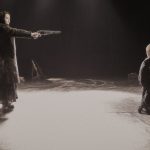 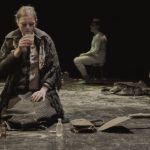 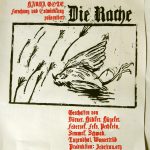