Anyone who has an email account at Yahoo! knows about the yahoo news.

A compilation of articles, “the most-emailed pages on the web”, from news services such as Associated Press, Reuters, Fox News, Al Jazeera, CNN and BBC News… Yahoo! News presents itself as a major media organization, since it expanded its focus by including their own original content in 2011. An Amazon-owned marketing data collection company (Alexa) claimed Yahoo! News one of the world’s top news sites, at this point.

For a few months I have been collecting titles of Yahoo! News, selecting the ones that are most decontextualized, such as “She beats the world-record by giving birth to ten babies”,  “This artist living in Paris is Ben Laden’s son” or “Rumble in the prison where he was incarcerated”. This list of titles work for me as “objets trouvés“ materials that I explore in the studio through voice-and-movement improvisation-scores such as the “non-stopping” scores of Jeanine Durning.

As a somatic practitioner, and since I am active on the dance scene, I have been particularly interested in how sound and words shape our body-imaginaries. I developed several works based on psychological sound techniques such as ‘Musak’ a.k.a. elevator music, ‘super-charged-positive-affirmations’ and ‘binaural beats’. I use source-materials that reveal social stereotypes, and investigate their haunting presence in the body. The Yahoo! News feed is for me another type of haunting material, an interface that displays addictive content, a feed that offers low visibility of the sources. A contemporary way of consuming news that I relate with Baumann’s theory of Liquid Modernity.

Coming from a video-art background, I place my work in the spectrum of dance and performance. I am interested in the gap between the presence of an actual body and its representation, the profane body and its idealization, the relationship between face and interface. During the residency at Alta, I will to develop this research with the material of the Yahoo! News. The improvisation scores will be used to generate choreographic and performative materials, and I will present a little solo work-in-progress at the end.
http://www.paulinepayen.net 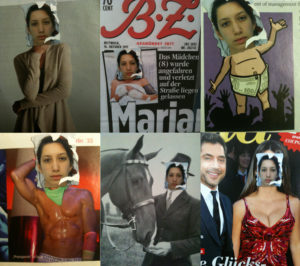