Michaela Dašková: This is not about me / Kateřina Szymanski: HEREAFTER

This is not about me! is a solo performance by Michaela Dašková, created in collaboration with Cécile da Costa and Marika Smreková. It is a physical narration of a dziad, a narrator, a clown, a trickster – who borrows contemporary expressions of various powerful political figures and comments on the world with his voice, gesture, and body.

The production balances on a thin line between parody and criticism, subtly emphasizing and revealing what should not be visible. It is based on concrete and commonly known political cases, which, however, have a universal message and generally reflect the values ​​and actions that are enforced in various social environments and systems.

The narrator’s body transforms under the influence of various political narratives, juggling words, screaming, stuttering, roaring and the voice is flowing through space, running away, crawling or tensing… 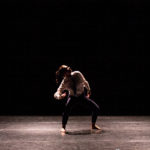 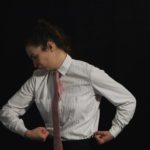 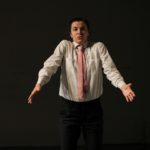 A view gliding across a confined space. It is I who determines the place – point – moment on the map. “HERE” – I say, I show, and I know I am far away. I want to get closer.

I touch with my finger, for example, a tabletop, or a paper with a drawn structure that belongs to the past. I understand. The layers in which I find myself, to which I pay attention, form a landscape and I form a new map. I am with you. My heart is beating, with you.

This is a performance in which Kateřina Szymanski works with the body, objects, material, and space. Through the optics of “distance, time and rhythm”, based on personal experiences, she looks at some social and political topics of the present, the choice of which she leaves up to the eye, perception and interpretation of the viewer. 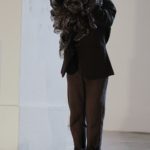 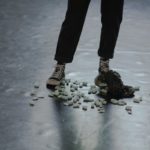 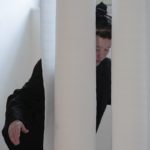 Pay What You Can

In 2021 all events at Studio ALTA were free. In 2022 we are introducing a new pricing system – Pay What You Can – which will allow you to choose to pay for your ticket an amount you can afford.

Tickets for each event now feature a suggested amount, giving you access to performances at ALTA for a lower price. Great! If you can pay more, you will help others pay less. We don’t wish to judge nor stigmatise but create a space for mutual solidarity and make culture accessible.

The Pay What You Can system is inspired by similar systems used by  Theater, Atelier 210 in Belgium, and Battersea Arts Centre in London.