Each solo stands on its own and can be presented independently. The set up for both pieces is a fictitious interview situation. The starting points and methods of the two works are very different:

in “deviant answers – local time” 8 questions colour the flow of movement to more and more expose the actual person interviewed: a famous artist in a certain moment of his life and in a certain city – which later became an iconic moment for a whole generation.

“es wird gesagt, sie lebten in kleinen hotels” refers to the French writer Jean Genet: some answers he has given and what still can be found of him in the metaphoric space in which the dance unfolds.

In their almost forensic approach both pieces appeal to a searching eye and a searching mind as they challenge two different ways of communication: the more hermetic one of language and wording juxtaposed with the more careful, tentative and open approach of dance, movement and memory. 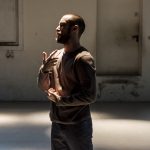 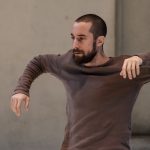 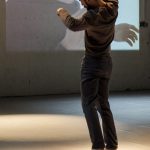