***CANCELLED*** Kateřina Jungová, Jitka Prosperi, Dagmar Urbánková: Background (And the smell even of this place will resonate in me)

…a bathroom, a block of flats, a wooden bunk bed, a city, an ancient house, a tile stove, mountains, a tap, a kitchen, a village farmhouse, a small room, a peat bog…

Places where we were at home, where we are at home, where we will be at home: in a landscape, in a house, among our own people and objects. Places – we remember, we discover, we lose, we abandon. Places as territories of our lives. Because a basic human need is related to them – the need to be somewhere at home.

An author theatre performance has been creating since 2016 based on the book The House by Dagmar Urbánková (about her native home in Wallachia), time-lapse texts from Old and New Town of Prague by Kateřina Jungová and text sketches from South Bohemia and Prague district Michle by Jitka Prosperi. Authors were searching also texts in Czech literature related thematically or topographically to their own texts. Therefor, there are excerpts from poems, proses, feuilletons and dairies by Egon Bondy, Františka Jirousová, Tereza Límanová, Jan Neruda and Filip Topol and they make part of the scenario.

The texts are clipped and then joined into topic chapters (Landscape, House, Objects, Work Places, Activities, Loss Of Place). The aim of the project is to use word balance, image, music and movement on stage. It integrates video projections, life camera (capturing play with objects), original music and elements of site specific performance. 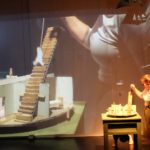 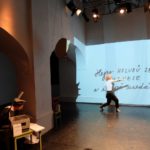 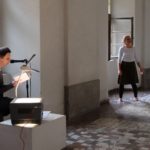