In 2013 white pop starlet Miley Cyrus performed a so called twerk choreography at the Video Music Awards together with her Afro-American dancers. The rhythmic shaking and the pornographic exhibition of the butt to bassy music caused indignation. At the same time, the performance made twerking accessible to a mass audience.

The appropriation and commercialization of black dances and dances of other minority groups has a long tradition in pop culture and goes far back until the Minstrel Shows of the 19th century. The questions these cultural appropriations are raising are the same since then: What meaning are the dances carrying? Are the dances belonging to someone and who is allowed to dance them? 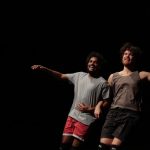 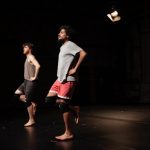 Supported by the NATIONALES PERFORMANCE NETZ International Guest Performance Fund for Dance, which is funded by the Federal Government Commissioner for Culture and the Media.