This minimalist solo is a dialogue between dance, visual arts and poetry.

« Ouvrir le temps (Times to be opened) » is a subtle conversation between the dance of Eva Klimackova, the regard of the visual artist Laurent Goldring and the poetry of Ghérasim Luca. An enigmatic liaison is created between gestures and words: serious and absurd, between appearance, disappearance and disfigurations. To feel, to move, to perceive, to say becomes suddenly the operations to discover the infinite strangeness of human being. The deformed and strange beauty of the movement is perfectly resonant with the way that Luca sculpts and cut the language. Eva Klimackova and Laurent Goldring share the same need for quality, in the movement as much as in the image. It is on this basis they created “Times to be opened”, continuing the researches of Eva Klimackova for a totally personal vocabulary of movements, and those of Laurent Goldring on other possible visions of the body. “Times to be opened” is this specific time needed to dig deeper into movement and vision and it is this time that is proposed to the spectator. 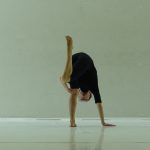 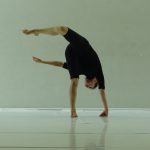 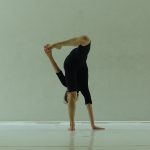 Visual artist, French, lives in Paris and works worldwide. Studied philosophy at Ecole Normale Supérieure (Paris) and City College of New York. His whole work can be understood as a confrontation with cinema as a model of representation and creation that leads to the current depletion of images and reality.

It consists in a wide production that crosses different genres and media: video, photo, sculpture, installation and choreography which all demonstrate that it is possible to see differently the body, the portrait, the urban landscape, and everything we call signs. He was directly involved with the creation of shows by Xavier Le Roy, Blut and Boredom, Ectoderme and Self-Unfinished (1996-1998), and by Maria-Donata d’Urso, Pezzo 0 (uno and due) (2002). He then co-signed work with Benoit Lachambre, Saskia Holbling and Louise Lecavalier the rrr… (reading readings reading) pieces, (2001), Is you me (2008) and Squatting Project (2012-2016), as well as Figures (2008) with Germana Civera ,Unturtled (2009/2012), Der Bau (2013) and Collective Jumps (2014), with Isabelle Schad,  and Ouvrir le temps (2016) with Eva Klimackova.